The History Of Libraries II. – Middle Ages And Renaissance

When we are talking about the Middle Ages, the first thing that comes to mind is most likely not books or art. This period took place from the 5th to the 15th century and was characterized by massive migrations of people and deurbanization. Opposed to the blooming societies of the classical antiquity, the medieval towns in Europe were rather simple and behind their times. Violence, diseases, and the lack of education were defining features of the period, confining the previous breakthroughs in the fields of architecture, infrastructure, and art.

The decadence of various life aspects also caused a big barrier in the advancement of libraries. In the late antiquity and after the collapse of the Western Roman civilization in 476 AD, many antique libraries were destroyed by wars or natural disasters. Also, due to the drop in overall life quality literacy was uncommon, and people paid less attention to books and literature in general. Moreover, the limited communication and commuting between the deurbanized medieval towns also caused a big obstacle in the circulation of books. Even if the people had the aim to spread the knowledge, it was commonly biased by arbitrary deformations of the text, because printing was still not discovered in the Middle Ages.

Compared to the period of the classical antiquity, religion became a lot more significant in the Middle Ages. In 380 AD emperor Theodosius issued the Edict of Thessalonica, which made Christianity the official religion of Rome. Although the Western Roman civilization suffered a massive fall, the Christian views continued to spread across Europe. By the 8-10th century the majority of the leaders in Europe had Christian views. This obviously had a big impact on the library structure and the theme of the books too.

The role of medieval libraries

As Christianity became more and more widespread, monastic communities and monastery libraries started to develop in the early Middle Ages. These were religious institutions that also functioned as learning centers, encouraging monks and nuns to study and pray. The main role of the libraries was to preserve the collected knowledge and to provide it to the people in the monastery.

The monks took an active role in creating and collecting different texts. Monastery libraries mainly consisted of scriptures, philosophical writings, and some secular literature, primarily from antique poets. The latter however was handled with critique. The books were made out of parchment, papyrus and on rare occasions even paper, depending on the century and the available material in the region they were written. The letters in the books were painted with various colors, with red and blue being the most dominant ones.

Although the monasteries were very protective towards their books, they often made lending possible in case the borrower provided a deposit. At the same time, they tried to obtain a big collection of books at all times. They often received works from patrons or benefactors and regularly borrowed books from other institutions to make a hand-copy. Additionally, the most important manuscripts were usually chained to the shelves, representing the value of these possessions. 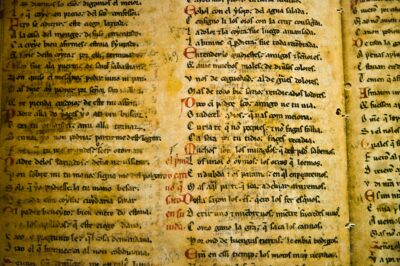 After the depression of the dark ages, the late middle ages brought advancements in various aspects of life. The medieval towns were reborn, more and more institutions were established, and an improvement on general literacy took place as well.

It was also in the late middle ages (around the 11th-12th century) when the foundation of the first universities started throughout Europe. The libraries of these institutions began to provide a space for studying and books besides the monastery libraries. They were frequently used, because the books and the knowledge on their pages were extremely valuable and expensive, so it was highly uncommon to obtain a private collection.

With an increasing number of scholars attending these universities, reading became viewed as an intellectual action. This is part of the reason why the 12th century can also be called the period of the first reding revolution. Besides that, it is also since this was the first time when silent reading (only with eyes) became common. The goal of reading in the period was shifting towards learning and exploring instead of the previously typical religious aspects.

The outlook and the structure of the books developed as well. The frame generally became smaller, and due to the increased length, the books now were commonly split into chapters. They also contained a table of content and they always had a title, making the systemization easier.

From the 14th century humanist renaissance movements spread through Europe, which resulted in the further establishment of non-religious libraries. These institutions functioned as studying and meeting places of scholars who collected and produced written texts on various topics, including philosophy, mathematics, religion, and science. Although these libraries were independent, they were still not completely open to the public. It was mainly the wealthy and well-taught aristocracy who had access to the books. At the same time, the class who used the libraries widened – now it was not only scholars, but also courtiers, officials and the richest of the bourgeoisie. Also, the renaissance was the first time period since the antiquity when the role of the librarian was reintroduced. 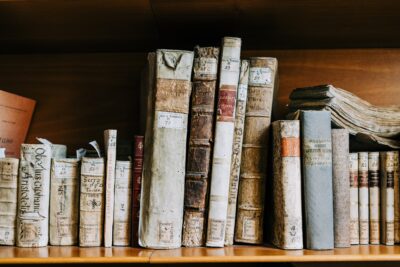 With the rise of the renaissance, private collections became more and more general too. The books, similarly, to the late antiquity, were once again the sign of wealth and glory. The emperors of the period had huge book collections in their renaissance royal households. For instance, Hungarian king Matthias Corvinus established Bibliotheca Corvina, which was one of the first and biggest collections, only outshined by the pope’s back in the 15th century.

When Gutenberg invented the printing press in 1440, the spreading of different books became even faster and easier. With the increased availability and improved literacy ratios, the demand for the books was significantly higher as well. This resulted in further library openings and litterateurs producing more works than ever before.

As the religious world view faded in the renaissance, the poets and writers of the period reached back to the antique texts and used them as their primary source of inspiration. They collected, copied, translated, and reimagined the ancient writings, admiring the work of antique scholars. Moreover, as the content of the writings in the renaissance was not regulated so strictly, new genres and themes appeared. The most significant humanist reformer poets and writers were Petrarch, Boccaccio and later also Shakespeare. And although Leonard da Vinci was not primarily a litterateur, his achievements had a major impact on the advancement of education and libraries as well.

Despite in the early middle ages a drawback took place in the advancement of libraries, the time of the renaissance meant a major breakthrough for the book and library world. Thanks to the invention of the Gutenberg Printing Press there was a capacity to spread not just valuable texts, but entertaining literature as well. Furthermore, the humanist literates created new genres and bibliographical tools that are still used to this day in our modern world. As the name of the period suggests, art and libraries were truly reborn during the renaissance.