Academic librarianship has faced a great amount of change during the past two decades. Libraries from the higher education system, along with those outsides of it, have handled multiple technological and socio-cultural paradigm shifts, by changing their organizational strategies and services. For example, information today is created, shared, and stored differently than is has been in the past, and with time, all the processes will be substantially altered. That is why an organization must be highly adaptable to the world’s constant changes. Likewise, academic libraries should start improving their leadership competencies, such as establishing a stronger vision, collaboration, and communication.

What distinguishes great leaders from average ones?

When Daniel Goleman (psychologist, Ph.D. and bestselling author) did an extensive analysis on executives from nearly 200 successful companies, he discovered that emotional intelligence, also known as EQ, is twice as important as IQ and technical ability in stimulating work. In fact, we can all increase our level of emotional intelligence with persistent training that activates the brain’s limbic system, which governs our feelings and impulses. There are three steps to achieving better emotional awareness and balance: incentive, extended practice, and feedback.

Consider a library manager whose colleagues report is low on empathy, does not listen well, and often disregards differing opinions. When the library director points out these deficiencies reported by the team, the criticism causes the manager to be more incentivized to improve, and reflect on what could have been done differently. By watching other leaders who are good listeners and trying to mimic their behavior, the library manager gradually becomes more understanding. This improvement helps to boost the other librarians’ morale and the team’s productivity overall.

According to Goleman, there are four fundamental capabilities that every leader should grasp to forge stronger relationships and increase the effectiveness of an organization. The first competency is self-awareness,  the ability to understand one’s emotions, as well as recognize their impact on the overall work performance. People with a high level of authority should administer a realistic evaluation of their strengths and weaknesses, without neglecting the positive sense of their confidence and worth. Effective self-regulators tend to be trustworthy, comfortable with ambiguity, able to suspend judgment, and open to change. It is advised for library heads and directors to gather peer feedback in order to uncover the emotional blind spots.

The second domain is self-management, a skill described as effectively handling distressing emotions, so they are not crippling.  By attaining this skill, a library manager will be able to address disruptive impulses, display integrity, overcome internal obstacles, and readily seize future opportunities. It is crucial for the person in the leadership position to display positive emotions, get involved and be enthusiastic about work-related discussions, they should also seek to align their actions with their passions whenever possible.

The third imperative personality trait one must embrace is social awareness. This involves the skill of exhibiting empathy towards subordinates. Seeing things from someone else’s perspective, and acknowledging others’ values and beliefs can help library executives motivate and engage others. Empathetic leaders are good at developing and retaining talent, serving clients, and managing cross-cultural sensitivities. In the library world, directors and managers should make a conscious effort to understand and actively listen to coworkers, taking note of their body language, as it may say more than someone is willing to express out loud.

The last element on Goleman’s list is relationship management, which comprises the abilities to inspire others through a compelling vision, to de-escalate disagreements and to orchestrate resolutions. As an authority in the university’s library department, one should learn how to wield persuasive tactics and become the catalyst for collaboration and effective teamwork. It might seem counterintuitive, but emotion can be a valuable source of information when making rational decisions as it can directly affect the performance of the team and the library’s overall environment. 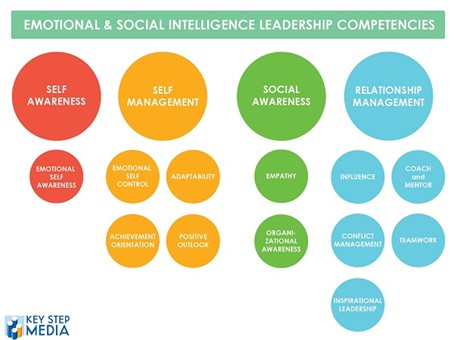 According to Goleman, there are six leadership styles that are based on an individual’s emotional intelligence and their way of handling people. There is no one good or bad style, in fact it would be best for a leader to master and practice a combination of all six, depending on the internal circumstances as they occur at their organization. 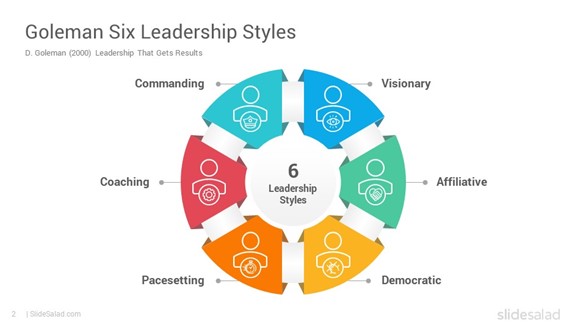 The coercive, also known as the directive leader usually demands immediate obedience. His or her competence is the drive to achieve, initiate and self-control. They use rewards and punishments as motivators. He/she delivers the most in times of crisis when very quick action is needed. The leader is confident in what actions need to be carried out to kick start a quick turnaround or deal with problem employees. For a long-term leadership strategy, if used excessively, this style will hurt the organization’s climate and overall performance. However, sometimes a “heavy hammer” is needed to obliterate projects that do not bring value or substantial profits.

The authoritative leader is usually a visionary. His/her go-to phrase would be “Come with me”. His/her strengths lay in self-confidence, empathy and being able to catalyze change. The leader with such an approach will give clear directions towards the end goal. This is the recommended style for library management since it has the strongest positive impact, as it appeals to people rather than controlling and dominating them. The next style is the affiliate one, where the preferred method is to create harmony and build emotional bonds. For this leader people come first as the underlying emotional intelligence is characterized by empathy, building relationships and communication. This leadership style works best when there is a division or a rift in a team that needs to be healed or during times of great stress, to motivate people, by creating consensus and drawing people to work together. An affiliate leader within an academic library would be a community builder, who grows the team based on their shared values, thus strengthening the overall culture and climate.

The democratic leadership style prefers to forge cooperation through participation. This type of leader is driven by tremendous ideals, rather than by common values. They try to draw in the conversations, to uncover the thoughts of their valuable employees. Their main competencies are collaboration, team building and communication. This leadership style is best used when aiming for librarians and other library staff to buy-in to the vision or consensus for the common objectives. On the other hand, is the pace-setting style, used by leaders who always set high standards for performance. These leaders’ best traits are conscientiousness, a strong drive to achieve and initiative, meaning they lead the way. Such executives seek quick results from a highly motivated and competent team. In a university library environment, this leadership style can often have a negative impact because the director or the manager is running ahead of the pack when the team itself may not be ready to keep up with the fast pace.

Lastly, there is the coaching leadership style. The preferred approach of such leaders is to develop people for the future. Their style in a phrase would be “Try this”. The acquired underlying emotional intelligence competency is empathy, self-awareness and developing others. This style performs at its best when help is needed to improve employee’s productivity or develop long-term strengths. The style has an overall positive impact on the climate of the team, because, in the case of library leaders, they will thrive to improve each member individually.

The directors, managers and senior members of the academic librarianship can assist the progress of their team by cultivating certain abilities such as communication, developing librarians, facilitating change, having a clear vision, cultural competence, and relationship building. As mentioned previously, there is no bad leadership style. However, if only one can be used, Goleman suggests using the authoritative one, and to try and avoid the coercive and peace-setting styles.

Hopefully this article has provided an extensive overview of emotional intelligence traits and the various leadership styles that can be implemented by an academic library executives, or even by the librarians and library staff themselves.

Emotional Intelligence: Why It Can Matter More Than IQ – Daniel Goleman

Daniela is a content writer for the Princh Library Blog. Princh, which is a printing solution designed specifically for and with public libraries, makes a consistent effort to provide advocacy for libraries and library professionals. The Princh Blog discusses library specific topics that inform their readers of library trends, insights, technologies and more.