Who are the non-users and how to attract them to the library? – Interview with Donna Fletcher

This week, we’re exploring the “non-users” topic. For this, we’ve interviewed Donna Fletcher, library consultant that has been studying non-users for more than ten years. She gives us insights on who the non-users are and how to make them aware of the library’s existence and its multitude of services.

1. Can you tell us a bit about yourself and your activity in the library world?

I’ve been in the library world for about ten years. Before that I was in advertising and marketing and in this time, I’ve been studying people who don’t use libraries. What I generally do for libraries, public libraries to be more specific, are surveys and strategic plans. I currently run the Library Surveys Consultants website where we work with libraries to gather and analyze the opinions of their community, stakeholders, and staff.

2. Who are the non-users of the library? What is their profile?

There are many kinds and it all depends on each library, frankly. For example, I have a library very close to where I live and they wanted to talk to the non-users. We managed to do that, however, the non-users there were old, their kids were done with school so they would just buy their own books. That’s all that was.

But, there is another one I worked with and there were a lot of non-users and they didn’t know really anything about what you can get in a library. Why? They might not live near one, aren’t interested in books, or don’t know about all the new services you can find in a library (e.g., classes, ebooks, or programs). It all depends on each library how they make them known in the community.

People just think they don’t need the #library because they don’t know what services the library offers. Click To Tweet

Also, in the US, there are plenty of services that are not digitized. People don’t even know about all the computers we have at the library. Besides, sometimes the hours are not good, mostly in smaller libraries. Also, people just think they don’t need the library because they don’t know what services the library offers. 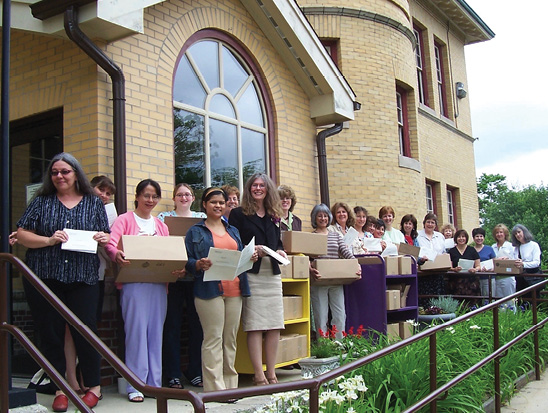 Librarians from a public library Donna worked with posed with all of the surveys they were about to send to residents (Source: infotoday.com)

3. What can libraries do to find out who their specific non-users are? Where should they start?

#Libraries have to find out what the non-users do and what they want to have at the library. Click To Tweet

You also have to look in your library, too!

Interviews with folks in the library are one of the richest sources of info about perceptions and usage of the library. During my study, I set off one day to interview patrons in a suburban library. As it turned out, a number of the so-called patrons were parents who brought their children to the library but did not avail themselves of any services.

4. And then, what can libraries do to attract them and raise the number of visitors?

These libraries are getting together people that don’t use the library and get them into the library and show them all the things they have. Libraries try to promote their services, but I have been in advertising and marketing for a long time and it’s not that simple to promote all these activities. Some libraries are doing it well but others could do it a lot better.

To promote their activities, #libraries need to have the staff enjoying patrons coming in and presenting all the library’s services and being proactive. Click To Tweet

To promote their activities, libraries need signage, they need to have the staff enjoying having patrons coming in and present all the library’s services and be proactive: “Come here, let me show you this and this”.  That really works frankly. Some libraries have a special desk for those items or others have a librarian who does that and who can tell people more about the library.

Read the results of the Engagement Survey. Quality and range of books and other materials came out as the top priority in a countywide survey of library users and non-users published this week https://t.co/wBfgOdjxKk pic.twitter.com/ZGqiHB0gVI

5. How did the result of your study of non-users influence the libraries’ strategy?

Once we did a mail survey in a Chicago suburb. There we found out the main reason non-users did not visit the library was they have got their info/movies/books elsewhere. We looked specifically at non-patrons with children under 18 – the library shortcomings (space, selection, parking) turned out to be the major reason why they were not using the library.

Research Findings: the #library shortcomings (space, selection, parking) turned out to be the major reason why they were not using the library. Click To Tweet

Other learning – these non-users aren’t anti-library. In fact, 54% were traveling to other libraries in the area because of the better selection of materials and more spacious facility.

The libraries had to adapt to these findings and make some changes. That’s the main point of the research. Find what doesn’t work and change it.

While interviewing the users at the library, I found out that parents were not availing themselves of any service because there was no offer for them, there were very few foreign language titles and also, they couldn’t leave their kids in the children’s section while they went to the adult section. This way, the library found out they had to offer foreign language materials and put parts of adult collections in the children’s area.

6. Do you have any advice for libraries looking for new ways to attract the non-users?

As I’ve already said, you have to go where the non-users are, tell them about the library and try to get them in there as possible. It’s not hard to convince them to go the library. Of course, it depends on how the person is liked but I do know it can work, especially if you create some kind of program at the library and attract them with that.

GO where the non-users are, tell them about the #library and try to get them in there. Click To Tweet

Also, I know how it is in the US and not in Denmark but it is difficult sometimes for libraries to find the time for these programs but even if it takes time, it’s so worthwhile to find residents who’ve never learned what public libraries provide or that they’re free.

If you enjoyed the read, let your network know. Help them get innovative ideas on how to use social media to attract users to libraries, too! We’ll be back next week with another interesting article from the library world!

Journeying With The Nigerian Public Libraries

Libraries exist to serve their communities. Said communities should include those who are traditionally looked at and treated as outsiders; people who [...]