Why In The World Would You Drop Fines? The Case Study Of C. E. Weldon Public Library

Libraries fines are the most debated topic at the moment in the library world. Two months ago we asked our blog readers how much of their library’s revenue is from library fines and if they would consider removing fines at their library or not.

Poll results: 90% of poll respondents would consider removing fines at their libraries

When asked if they would consider removing library fines, 90% of respondents had an affirmative vote. How libraries can remove their fines without compromising their overall budget? Meg DePriest and Beth Crist explain everything in the blog post here, 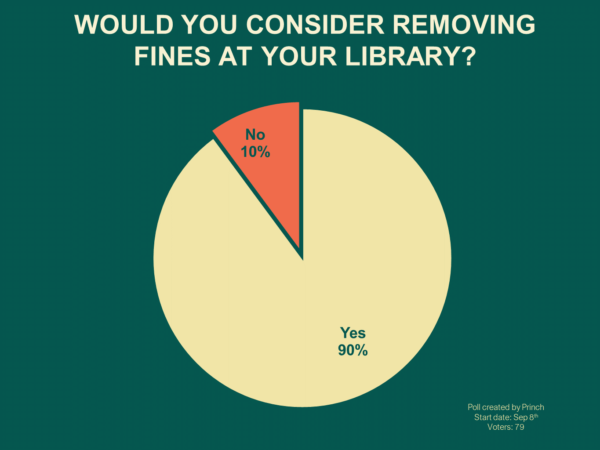 To provide you with more data on how removing fines can be a successful method to increase circulation, we have talked with Roberta Peacock, the library director of C. E. Weldon Library (Martin, Tennessee). She tells us more about the reasons that determined her to eliminate overdue fines and how her library has benefited from doing it. Read more insights below.

Check out her thoughts below!

I have worked in a library at some capacity almost all my life. I started working in my high school library as a student aide. I started my college life at a Community College where I worked in the library to help pay my tuition. When the time came to choose a four-year college, I decided that being a librarian would be my career choice, so I chose the University of Southern Mississippi because it was an accredited library school in my home state of Mississippi. After marrying a young man in the Navy I moved to Meridian, MS where I was an elementary school librarian.  After my husband finished his tour of duty in the Navy we moved to Martin, TN where I found a job as the assistant library director at the Martin Public Library.  I have now been the Library Director of the Martin Public Library for the last 18 years.

When I was younger, one of the first punitive moments outside my home was from the library. The terror of being punished for having a late #book continued even past my formative years. #libraries Click To Tweet

Upon being hired as the Library Director I began the process of eliminating overdue fines. When I was younger, one of the first punitive moments outside my home was from the library. The terror of being punished for having a late book continued even past my formative years.  Ever since childhood, I dreamed of the day where the library would be a positive experience.  A patron should never feel like they were being punished for coming to the library to seek education and recreation. 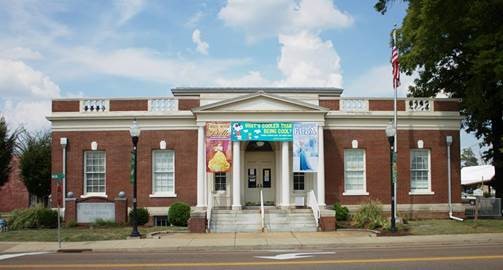 2. You’ve been working at the library for a long time, were you the one who initiated the movement to remove fines at your library? How did it all start?

During my career, one of my observations was that we always had a certain segment of the population who would come to the library and apologize for being late and offered to pay the fine. On the other hand, we also had those patrons who avoided paying the fine by dropping the book in the book drop and never coming back to the library.  It always bothered me that we punished the conscientious person who always returned to the library and never received a dime from the other patrons that we never saw again.

It always bothered me that we punished the conscientious person who always returned to the #library and never received a dime from the other #patrons that we never saw again. Click To Tweet

Also I’ve heard parents saying to their kids, ‘We don’t want you to borrow books because you might be late with them and then you’ll have fines to worry about,’” In fact, overdue fines can end up keeping thousands of kids from accessing library resources, just because they’re unable to pay what they owe.

To maximize access and positive relationships between the library staff and patrons, I decided to present to the library board the idea of eliminating fines. I explained to them that we wanted to send overdue notices to patrons explaining that we were eliminating fines and that the notice was just a reminder that their books were due to be renewed or returned.

3. What were your reasons for removing the fines?

Our reasons for this experiment were:

1) To eliminate the negative feelings that the fines conveyed.

2) To reduce the huge amount of overdue items because some people were ashamed to confront us.

3) We were not generating a large amount of revenue.

4) We were spending a lot of staff time working on overdue items where that time would have been better spent helping patrons and planning and implementing programs.

The move to no fines came when the board realized that fines weren’t encouraging the timely return of materials;  that that small fees did not affect overdue rates, in fact, fines were actively working against the library’s very reason for existence.

The move to no fines came when the board realized that fines not only weren’t encouraging the timely return of materials; that that small fees did not affect overdue rates, in fact, fines were actively working against the #library’s very… Click To Tweet

We were shutting off access to the library when one of our main principles is trying to provide the widest access to materials that we can. Fines ultimately were counter to the overall purpose and vision of our library.

4. What results have you noticed after removing the fines?

As I said before we had a huge amount of overdue items when I took the job a library director.  The first year we eliminated the fines our overdue items dropped to approx. 800 items.  The following chart demonstrates how this change has affected our statistics in the past 6 years. 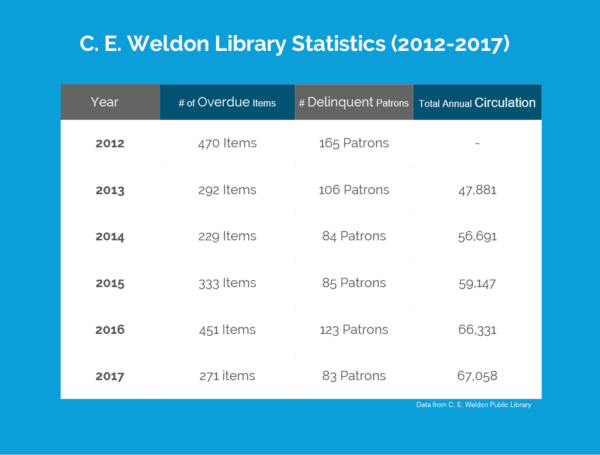 After reviewing our statistics from the experiment we learned:

– Our patrons return their items on a more timely basis. In fact approx. 95 percent of materials are returned within a week of their due date.

– We have more patrons return to using the library. They are no longer ashamed to come to the library because of having items that were late.

– There has been a 60% drop in overdue items from the time that we started this in 2005. At that time we had thousands of overdue items. That year we started mailing reminders and informed our patrons that fines had been discontinued.

– 2016 overdue items (see above chart) illustrated that we have the best results getting books back by keeping on top of mailing reminders of overdue books with the statement that we no longer collect fines.

– We have seen a 15% increase in circulation.

– With the elimination of overdue fines, we found that the boost to morale ― for both patrons and librarians ― was striking.

– Eliminating fines did not make a significant loss in funding, and enforcing fines itself required funding and staff time. In fact, collecting fines rarely made a meaningful source of income for the library.

Eliminating fines did not make a significant loss in funding, and enforcing fines itself required funding and staff time. In fact, collecting fines rarely made a meaningful source of income for the #library. Click To Tweet 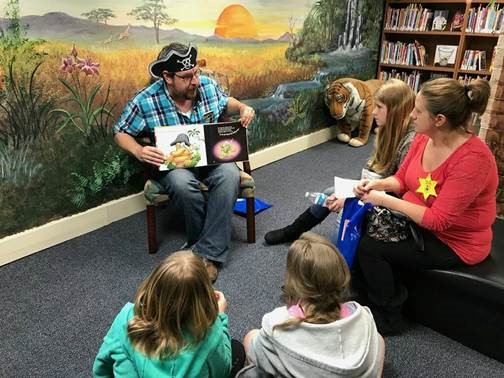 To sum it all up libraries have enough to combat. Fining our patrons for a small amount of money works against everything that public libraries ought to stand for. The library should convey a cordial, positive atmosphere, be supportive of our customer’s needs, and maintain a good name in the community.

Did you enjoy reading Roberta Peacock’s insights? Follow us on Twitter and let us continue the discussion about fines.

In case you want to have a chat with Roberta, you can get in touch with her by e-mail here. We will be back next week with another interesting article from the library world!