Those Who Manage The Sounds

Most likely due to the institution’s historical background, libraries have been usually associated with the written word and the “book” format — a nature reflected indelibly in their name’s etymology.

The fascination and respect caused by writing have been constant among most literate human societies. In books (whatever their shape), knowledge considered to be true, sacred laws, codes to be respected, and even the word of the Gods, were stored.

The value given to those texts was immense. This resulted in the importance that libraries acquired, as warehouses in which such goods were stored and organized. An importance that, for a long time, would make them both places reserved for a select minority and targets of the most ruthless attacks.

Nowadays, most of the tangled roads that cross the library universe still tend to lead to what is written. But those paths are not the only ones, much less the most interesting. Beyond the printed or handwritten word, an entire horizon opens up, populated by other formats, supports, channels and codes through which information moves.

Libraries and other memory-preservation institutions are no longer managers of texts, but of documents — that is, every element capable of storing and transmitting information of any kind. Such a broad category includes elements as “unconventional” as the painted fabrics of the Shipibo people and the facial decorations of the Dule, to name a couple of Latin American examples. The range of possibilities expands, and with it the opportunity to access data that until now has inevitably fallen outside the official mapping of knowledge.

It should be noted that early archives and libraries had materials such as maps, illustrations or engravings. But their number was insignificant compared to that of books. Today, that proportion has changed substantially. With the increased presence and relative importance of non-textual documents in libraries, a handful of previously “small and alternative” library trends started gaining weight and visibility. The sections of the library that dealt with these materials (map libraries, newspaper archives, discotheques…) grew, and some became independent and acquired a life of their own.

That was the case with audio libraries.

As its name suggests, an audio library retrieves, organizes and disseminates information in sound format. Such information may be accompanied by other documents that complement, expand or clarify its meaning, but the focus remains on the sound: be it spoken word, music, ambient noises, animal voices, or any combination of some of them.

Sound was one of the first means used by human beings to communicate and transmit their knowledge. Thousands of years after the first word was spoken by a member of our species, orality still remains the most important way of sharing knowledge, even among the literate and urban population — for societies having enormous written collections, it is valid to affirm that a good percentage of information (especially those related to identity, memory and “micro” history) continue to be transmitted exclusively by oral means.

The importance that audio-libraries have acquired is corroborated by the number of organizations that bring together professionals working in this area: from the expectable IFLA Section (“Audiovisual and Multimedia”, and its parallels in national associations such as ALA) to international or national associations, as well as regional or local networks and working groups.

As with many other branches of the Library and Information Sciences, the one dealing with sound materials has been able to take advantage of the digital revolution, with its new compressed formats, its massive distribution channels and its versatile means of reproduction. New technologies can help to collect and spread oral history, to develop ethnomusicological projects, to recover threatened languages ​​and to produce and distribute sound cartographies, in those free and open environments that the “digital humanities” advocate for.

Among the many examples of existing audio libraries in Latin America, mention may be made of the work carried out since 2008 by the Fonoteca Nacional de México (National Music Library of Mexico), the first of its kind in the continent. It contains an exhaustive collection related with the country’s history in general and its rural and indigenous communities in particular.

The media library of the Mexican Comisión Nacional para el Desarrollo de los Pueblos Indígenas (National Commission for the Development of Indigenous Peoples) is another interesting example, focused on multimedia and indigenous languages; many of its documents are freely shared online.

Still in Mexico, the civil association Ruta del Venado is collecting an online audio library with vocabulary from most of the 68 indigenous languages of the country. A slightly different way of creating an audio collection is recording videos, like “68 voces, 68 corazones” (68 voices, 68 hearts), a series of animated indigenous tales narrated in their original language, created in 2013 by Graciela Budillo and freely distributed online.

Finally, in Colombia they have launched an “audio collection” which is actually a book with 9 CDs, produced by the Ministry of Culture. Titled “De agua, viento y verdor” (On water, wind and greenery), it collects nine endangered indigenous languages. 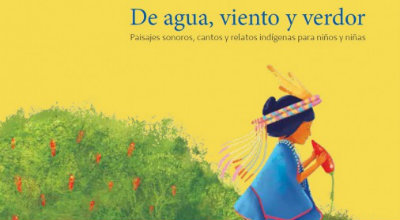 Whether through digital files and complex virtual databases, or through reels of tape and vinyl records, audio libraries rescue, protect, organize and disseminate a very important part of our memory and our intangible heritage: the one encoded by voices, sounds, noises or melodies.

Just as at some point in the past librarians understood that this sound information was also valuable, perhaps at some point in the future there may be spaces in which the information stored in certain tattoos, in some textile patterns, or in the crisscrossed reeds of a basket, will be collected and organized. In that sense, there are many prejudices and stereotypes to leave aside and many paths to follow.

And many others to open.

Today’s guest-writer, Lucas Maxwell, has many years of experience working with teens in school and public library settings. In 2017 Lucas received [...]

5 Ways Libraries Are Helping The Environment

Libraries have taken different initiatives to contribute to a global mission and make a positive impact on the environment through different green [...]