There are many official reports in the library industry, which confirm that libraries are still valuable to people no matter their socio-economic status. For example, Carnegie’s Shining a Light report shows that around 3 in 4 UK respondents say that libraries are important for their communities.

In recent years, many libraries adapted their services so that they can offer equal access to information even to the most sensitive groups of the community, such as refugees, people with disabilities or homeless people, who because of their living conditions or disabilities are unable to access the usual library services.

In recent years, many #libraries adapted their services so that they can offer equal access to information even to the most sensitive groups of the community, such as #refugees, people with #disabilities or #homeless people. Click To Tweet

This way, libraries have become a haven for many people in need as it represents one of the very few public spaces where they can go and spend quality time for free while having access to relevant information adapted to their needs. Not to mention, the library staff are considered the kindest by many people who come in contact with key public services (findings emphasized in a recent report created by Carnegie UK Trust).

In this blog post, we will highlight the different ways the most sensitive groups of the community benefit from using the library’s services:

In many cases, refugees are forced to leave their home country and settle down in a country that has a totally different culture. As newcomers, they need to learn the local language, learn to understand the culture and meet new people. Public libraries are known to be a safe space where everyone has access to knowledge and information, regardless of their cultural background.

To ensure their integration into their new home, libraries play a major role by guiding and teaching them, while offering an opportunity to socialize with other members of the community. Furthermore, many libraries have expanded their collection, so they can offer books and materials in various native languages.

The members of IFLA’s Public Libraries Standing Committee and their colleagues compiled a list of best practices around the globe and here are the two most important ones:

They offer language and meeting spaces

An example of libraries focusing on offering services for refugees is Cologne Public Library in Germany. The Sprachraum (language space) was created in 2015 by Dr. Hannelore Vogt, the library’s Director. It is a large ground-floor room that sits opposite the main library building and serves both as a meeting point and learning hub for refugees. Together with the volunteers, the library’s staff organizes social and learning activities like craft sessions, mentoring sessions or language sessions.

Read more about the library here >>

The Association of Public Libraries in Berlin (VÖBB) offers #librarycards to #refugees without asking for an official certificate of registration. Click To Tweet

This way, they can have access to a wide variety of books, DVDs, ebooks and periodicals in various languages and are allowed to check out items from any public library in Berlin. 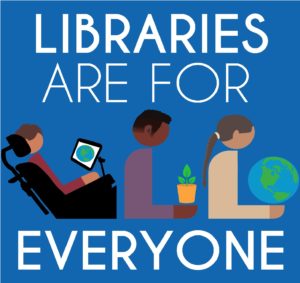 People with mental or physical disabilities may have specific needs that cannot be easily fulfilled through ordinary public services. Just by adapting the basic services, the library creates a welcoming space, where they can spend a few hours in the company of others and have the possibility to socialize with other people from the community, which can be a real benefit.

The International Federation of Library Associations and Institutions (IFLA) created a checklist on how libraries can offer access to information for people with disabilities. Here are a few examples:

They adapt the space to accommodate everyone

For example, Berkeley Public Library includes a series of extended services such as; internet workstations with adaptive software, screen readers for people who have a visual impairment or a learning disability and more.

By adding some additional services, and offering materials in audio or braille format, the library improves the experience of users with disabilities. A good example of these practices can be seen at the National Library Service for the Blind and Physically Handicapped (NLS) in the US. NLS is a national program funded by the government that gathers a network of public libraries, which offers braille and audio materials and also free home library service for people who cannot go to the library because of a disability. Thus, people have free access to all kinds of materials from the library in their own homes.

3. Libraries help the homeless integrate back into the society

It’s a sensitive topic and opinions are divided, but it has been noticed that the library plays an important role in their lives. The library is an attractive and safe place to spend time for the homeless since they are often alone and without the resources they need. Jaclyn Rosansky, in partnership with Amy Shaw from ProQuest, has developed a broad list of more than 30 ideas of services for the homeless that libraries offer:

Here are the two most important ones:

The San Francisco Public Library started a homeless outreach program in partnership with the local Department of Public Health, and the San Francisco Full-Integrated Recovery Services Team. The team reaches out to homeless people in the library and offers them training and information on where to find shelter, food or other resources. More interestingly, their team includes formerly homeless people that go through a 12-week vocational program.

The team reaches out to #homeless people in the #library and offers them training and information on where to find shelter, food or other resources. Click To Tweet

Many libraries offer access to various job search resources, such as job training, CV writing or basic access and assistance in using the library’s computers.

Zagreb City Libraries (ZCL) partnered with various social groups to create a project that focuses on increasing the chances of employability of homeless people and building their confidence. They offer courses that teach people how to use the internet to find a job and one main achievement was that “in less than a year, the library trained 63 people to use ICT – more than 15% of all registered homeless people in Zagreb. The service helped 22 homeless people get permanent, part-time or temporary jobs.”

#libraries are an important pillar of the #community and contribute to the good development of the community, even its most sensitive members. Click To Tweet

To conclude, just by providing equal access to information, libraries are an important pillar of the community and contribute to the good development of the community, even its most sensitive members. Libraries play a major role by guiding and teaching them while offering an opportunity to socialize with other members of the community.

Are you looking for more library insights and new ways to get more people to use the library? Stay tuned for our post next week and read the latest developments in libraries from around the world. Find us on social media via Facebook or Twitter and subscribe to our blog and receive relevant news sent directly to you.

How Do Libraries Support Mental Health?

On this week's Princh Library Blog post we have guest writer Barbara Band, independent library consultant, sharing her thoughts on how libraries [...]