Spreading awareness about the services that the public libraries have to offer their visitors is a challenge that many public libraries face. It is important to make connections with the local community that use the library services regularly as they are likely to spread awareness for the library through word of mouth. However, marketing to patrons and new visitors through channels they frequently use is just as important.

In the article below, we see a perfect example of how Leeds Library aligned their offline and online marketing campaigns to create awareness about resources offered at their library. As you will read below, their #whatsyourstory campaign not only generated awareness in Leeds but transcend to awareness in other countries too.

This is a great example of a modern library communicating their resources and services through modern marketing platforms and using real scenarios from their library.

Author note: This blog is adapted from a piece that previously appeared on the Libraries Taskforce blog.  The post is by Jason Tutin and Alison Millar.

Marketing of public library services is notoriously difficult. We offer so much to so many people so when designing a marketing campaign, it’s hard to know where to start! When we decided we wanted a new marketing campaign to change people’s perceptions of modern public libraries, we knew it had to be fresh, exciting and high profile. We also wanted to align our online and offline marketing, so our offer was more ‘joined-up’ across promotional channels.

The #whatsyourstory campaign was launched in late June 2015. It was designed to be fun and appealing to adults living in Leeds to inspire them to engage with the library service. The campaign features real people telling their personal stories about the positive impact Leeds Libraries has had on their lives. A maximum budget of £10k was allocated to the initial stages of this campaign. This included concept, design and plan execution.

Lamppost banners, a billboard, press and TV coverage, a website, blog posts and print flyers all accompanied a comprehensive social media campaign. You couldn’t move in Leeds without seeing something relating to #whatsyourstory – it was incredible! 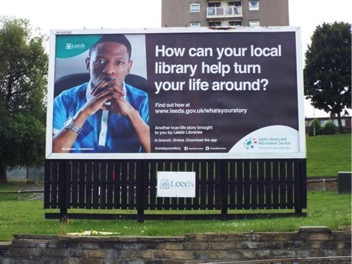 The characters of the story

Traditional media channels were interested in #whatsyourstory because of the stories of Wayne Levitt and Ma Maposa. These two people provided the inspirational case studies that featured in the first phase of the campaign.

Ma had a tough childhood. Growing up with limited prospects, he always dreamed of something bigger. After a particularly bad day, Ma found himself walking past Leeds Central Library, where Jamie from Studio12 was handing out flyers. Attracted to Studio12’s free music production studio, Ma began to visit. He finally had a place to be himself and do what he loved.

Ma went from strength-to-strength, and now with a strong support network behind him in the form of Leeds Libraries and Studio12 – he has set up his own YouTube channel, BigOnRoadTV, that promotes the talents of local up-and-coming music stars. As this grew, so did his passion for music, and he developed BigOnRoad to form his own record label under the same name.

Studio12 is an audio-visual media facility within our Central Library that provides free access to a production studio, training, accredited qualifications and an Industry Panel of creative professionals working in design, music, video and media arts. It is specifically for people aged 16 – 30 who are living in Leeds, with priority given to people not in education and employment.

Wayne had always been interested in his family history, but never had the computer skills to be able to access online archives and didn’t realise how close the facilities for learning these skills are, right here in Leeds. Wayne enquired about the facilities available at Morley library, picking up information about basic computer tuition. From this, he found out about the Leeds Local and Family History library, based at Leeds Central Library. Wayne soon became a regular.

Through these visits Wayne was able to trace his family tree back and made a ground-breaking discovery. He found that he was related to local war hero Arthur Louis Aaron, the only person in Leeds to win a Victoria Cross for his bravery in World War Two.

#whatsyourstory generated 20 pieces of media coverage during its launch including two articles in the Yorkshire Evening Post, a broadcast feature on Made in Leeds TV and many more articles in local publications. The potential audience… Click To Tweet

One feature was an interview with Cllr Debra Coupar, which included many library-related issues beyond this campaign, thus fulfilling more objectives than were originally planned. In addition to this, good relationships have been formed, with local papers indicating they will be keen to feature library features of this kind in the future.

Ma himself already had a good social media profile, and by working with him, the library reached a brand new demographic that would have been difficult to reach otherwise. 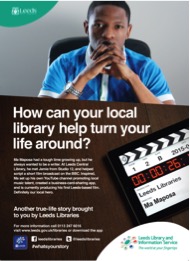 Besides reaching new audiences, we wanted the social media element of the campaign to promote engagement and interaction. Throughout the four weeks of the campaign, we had 365 interactions via social media for #whatsyourstory content. One of the most popular tweets was a photo of Ma’s billboard, which was erected on a popular commuter route between Leeds and Bradford.

The campaign received great support on social media from Leeds residents, businesses and organisations as well as other Leeds City Council departments and staff.

The impact of #whatsyourstory reached far beyond Leeds, with positive interactions from Australia, Canada and the USA! Also, we have noticed the images being used in presentations at numerous conferences. Click To Tweet

Our social media engagements increased throughout the campaign and, as a result, we gained more followers and raised our social media profile. Wayne and Ma’s stories were posted on our Leeds Reads blog and were by far the most popular posts of 2015, gaining 120 shares on social media. 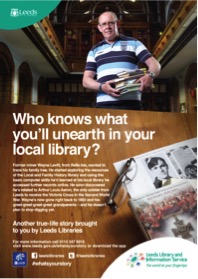 Another outcome we wanted to achieve was an improved profile of Leeds libraries within council audiences. During the campaign we recorded interaction from a range of accounts, including many council departments, the most influential being from the CEO of Leeds City Council.

Of the main objectives set at the start of the campaign, improved online engagement with users was clearly achieved with awareness of Leeds libraries brought to the attention of new demographics. And in preparation for future campaigns, good relationships were built with main stakeholders.

Give it a try

Marketing for libraries can be a task that may seem difficult but as demonstrated by Leeds libraries, a library marketing campaign can blend both traditional and modern marketing channels and use stories of situations that the library has had to promote the resources and services offered to their patrons.