One of the professional paths that pique the interest of the most curious minds in the Library & Information Sciences “universe“ is that of mobile libraries. These nomadic, wandering, itinerant units —with as many shapes and appearances as potential names— are devoted to taking books from the safe comfort of their shelves and moving them wherever they are needed or appreciated — which, for many cases, are the same.

Such a curiosity is probably provoked by the handful of “exotic” experiences that are generally used as illustrative examples when describing that particular section of the library universe.

On this regard, it is enough to recall the libraries on camelback running through the Kenyan counties of Mandera, Wajir and Garissa, on the border with Somalia, inhabited by nomadic herders, or the famous “biblio-burro” (library-donkey) of Luis Soriano, who continues to tour the mountains of the Colombian department of Magdalena and who inspired many other biblio-animals in Latin America (e.g. the library-donkeys of Nicaragua). They are joined by the biblio-donkeys of Ethiopia and Zimbabwe, the biblio-horse of Ridwan Suriri in the heart of Java, or the biblio-elephants of the Sayaboury and Oudomxay provinces, in northern Laos.

Libraries aboard canoes or boats have also been widespread, especially those travelling by the mysterious rivers and streams lined with rainforests of the Orinoquia, the Amazonia or the (probably less exotic but equally green) delta of the Paraná river, in Latin America. Or the Norwegian fjords, the Celebes Islands, the Mekong River or the Chalan Beel wetlands in Bangladesh. 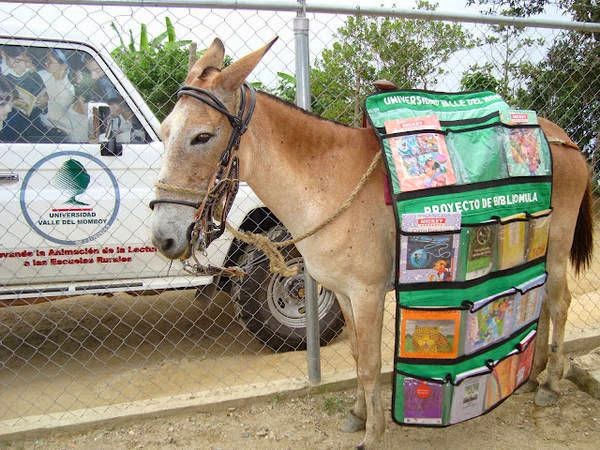 Those who travel in motorized vehicles —trucks, buses, cars, motorcycles, tractors, trailers, trams— do not cause such a big astonishment, although from time to time some originality appears and causes a smile. This is the case of “Weapons of mass destruction” by the Argentinean Raúl Lemesoff, the “bibliomotocarro” by the Italian Antonio La Cava, or the “Tell a Story” project by the Portuguese Francisco Antolín. There are also those libraries that move in vehicles without a motor, such as those travelling on carts in Colombia, or the many biblio-bicycles, including those in Antofagasta, in the Chilean Norte Grande, one of the most arid places in the planet.

But for a mobile library to exist wheels and motors, are not needed. Neither are animals of any kind. Large collections are not even necessary. The main objective of any mobile library is to get the documents —and a handful of them is enough, provided they are well chosen— to their potential users. This idea that has been put into practice again and again around the world. With backpacks and suitcases of “traveling books”, packages of novels, magazines and CDs that move from house to house and from hand to hand between neighbors, the forms of mobile libraries is potentially endless. Therefore, the only limit to a new mobile library is a librarian’s imagination.

Curiously enough, the experiences that continue to attract international attention are the exotic, the curious, even the extravagant ones. And those occupying the first position in mobile libraries’ rankings around the world are those based on motor vehicles, especially buses, and especially those that almost exactly replicate the appearance and operations of a “static”, standard library. The “micro” or small-scale initiatives are hardly spoken of: those librarians and reading promoters who travel neighborhoods or villages with backpacks full of books, or those who drag boxes with magazines and handbooks through dirt paths, they do not appear in the reports and statistics, or in the highlighted examples. And it happens despite the proved fact that those “micro” proposals are the most frequent ones (and also the most anonymous), the most interesting and the most valuable. This is due to the level of effort and personal and professional commitment implied in their development and maintenance, and because they respond to the needs and adapt to the features of social sectors that have been (consciously or unconsciously) neglected or forgotten by other library services.

Although there are numerous working guidelines, recommendations and manuals for traditional mobile libraries (probably the best known are those by IFLA, translated into several languages), there are not so many documents that advise libraries —especially those small and / or with fewer resources— to move collections without the need for a vehicle, or to advise “alternative” formats and / or procedures. Nor is there a catalog of “micro” international good practices that can serve as inspiration or guidance. So, in this sense, many librarians are left to their fate, their ingenuity, their creativity and the support offered by their community.

In Latin America there are countless examples of big and small mobile services. Besides the ones already mentioned, the collaboration between the National Library of Peru and the Aguaruna and Huambisa indigenous peoples should be mentioned . There was a very interesting “boat library” service created in the 80’s. Since 2012, a similar service, the “bibliobote”, visits the Solentiname archipelago, about thirty islands in the Lake Nicaragua. Another “aquatic” project is the one leaded by Antonio Beltrán, who travels through the neglected afro and indigenous communities in the Pacific coast of Colombia, in Carmen del Darién (Chocó department), bringing boxes full of texts. 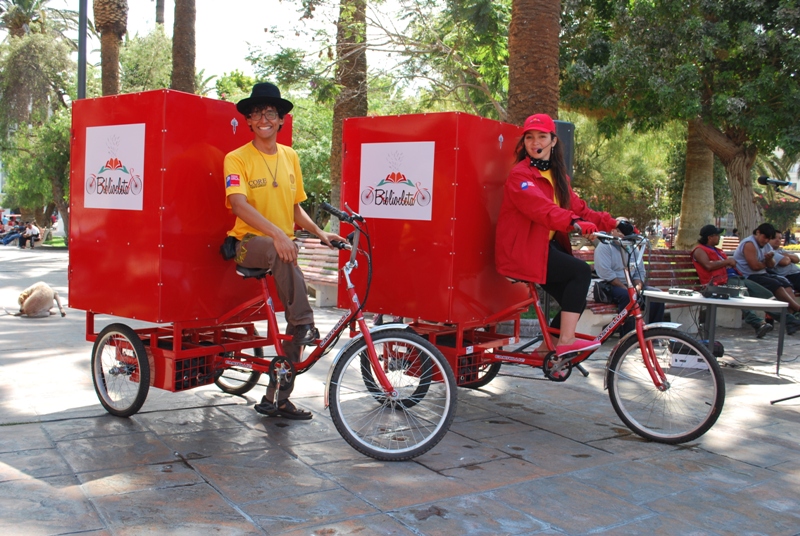 Books and their companions will continue to move, whether in luxurious mobile libraries or in small backpacks. After all, putting documents into circulation —the equivalent of keeping a collection alive— is one of the purposes of any self-respecting library. Meanwhile, as with many other roads of the library world, those of small mobile libraries are still waiting to be mapped, and their importance to be duly recognized.