Could Libraries Become The Fifth Branch Of Power?

The role of libraries in connection to the fake news phenomenon has been intensely debated in the last year as libraries are gaining more confidence than most media outlets.

Fake news has always existed but given the recent outburst of unverified and in some cases untrue news in the press, libraries have started positioning themselves as a fake news debunker.

International library organizations such as IFLA and CILIP took initiative and created different calls to action for libraries to start educating the citizens in spotting fake news.

IFLA took its inspiration from FactCheck.org’s 2016 article How to Spot Fake News and created a visual representation of it with eight simple steps to discover the verifiability of a given news-piece in front of you. It can be easily downloaded in different formats and languages so make your pick!

CILIP launched a campaign called ‘#FactsMatter’ that ran at the same time with the 2017 General Election campaign advocating for the vital role of facts and evidence in public life.

The #library 's offerings have the purpose of ensuring the necessary skills for spotting fake news. Click To Tweet

Local libraries have taken the initiatives even further as they have started focusing more on offering workshops, talks, educational materials, quizzes or courses on topics such as literacy, critical thinking, digital skills, etc.  All of these offerings have the purpose of ensuring the necessary skills for spotting fake news. 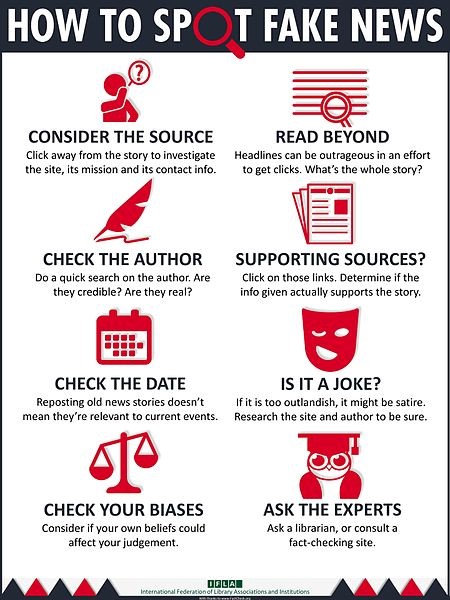 Libraries as a trustworthy source of information

At the same time, the confidence in media is decreasing and the importance of libraries is more crucial now than ever.

The Pew Research Center recently released a report on American people’s engagement with information. The survey results interestingly show that people are aware of all the misinformation existing online and even around them and they would appreciate having institutions helping them gain confidence in their digital and information literacy skills.

The confidence in #media is decreasing and the importance of #libraries is more crucial now than ever. Click To Tweet

In connection to this, an older report also shows that more than 70% of respondents feel that public libraries help them find information that is trustworthy and reliable and help them learn new things.

Therefore, the library is the best source for reliable and trustworthy information and it is gaining more confidence than most media outlets. 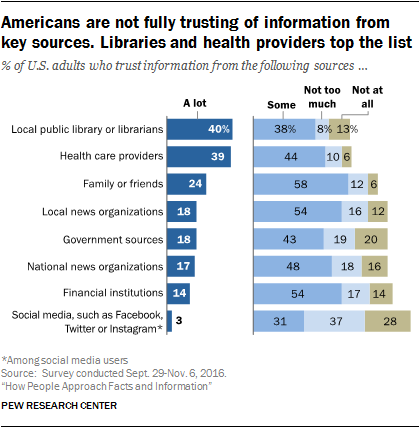 Libraries as the Fifth Branch of Power

Libraries are becoming a key player in ensuring that the right and correct information reaches the citizens. Altinget, an independent online newspaper in Denmark recently published a discussion with Steen Bording Andersen, Chairman of the Danish Library Association. In this article, Andersen presents and supports the idea that libraries should take the role of the fifth branch of government since the press and the internet are failing.

#libraries should become the 5th branch of power since the press and the internet are failing. Click To Tweet

He bases his affirmation on several reasons with the most important being the need for a “control mechanism since the press and the internet no longer are in control”. He considers libraries the best choice because they have a “long-term popular education tradition” and they are a trusted source of information by 94% of the Danish population.

Furthermore, another interesting fact Andersen emphasizes is that libraries can’t be controlled or dependent on the government, like the press. He states:

“No. In fact, we have plenty of examples that libraries face the local government. I absolutely do not experience the libraries being controlled by anyone. And it does not control the citizens either. People believe they receive neutral information from the libraries. ”

The whole interview can be found here in Danish.

Indeed, the library situation in Denmark is a fortunate one as libraries have the support of the government while being more autonomous at the same time.

Even so, could libraries become the fifth branch of power?

Did you like this? Help us spread the word. Find us on social media via Facebook or Twitter and read the latest developments in libraries from around the world.