Throughout history it has been proven multiple times that cats and librarians make the best duo. The imminent match between the two is the result of mutual love for quiet and organized places with cozy sofas to curl up on and infinite rows of bookshelves to barricade themselves within.

In ancient Egypt and the Middle Ages, the sheltering of cats was often practiced in cultural institutions, such as libraries, museums, and sacred temples. Beyond providing a spiritual and friendly ambience, the cats were protecting the old manuscripts, books and other written records from pests and rodents. An example of cats’ honorable service is dating back to the 18th century, when Empress Elisabeth of Russia ordered “the biggest cats from the city of Kazan” to catch the rats that took over the royal library and the rest of the Winter palace. Currently, the palace is known as the Hermitage Museum in St. Petersburg. For 275 years these furry four-legged animals have been the guardians of the galleries. Today, over 70 cats are still in partial operation within the museum’s basement and courtyard. 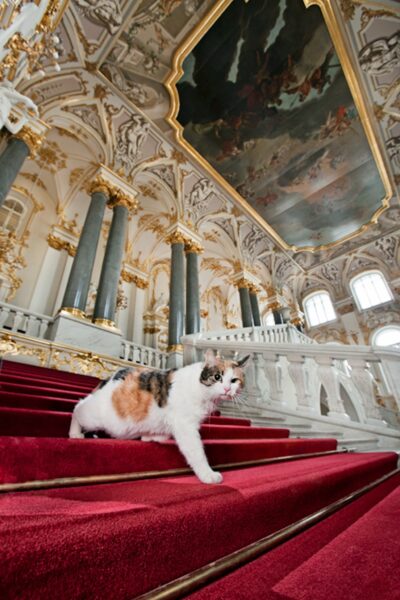 Nowadays, some cats are awarded positions within library management. Most of them prefer high-profile roles, such as marketing or public relations work. Some cats serve as brand ambassadors, by generating publicity and increasing library awareness. A perfect example of such is Horatio from the Centre Country Library in Pennsylvania. He is the “catfluencer” for library’s Instagram account, which has over 6K followers. Horatio is regularly promoting the newly released or the all-time favorite books and movies, as well as any upcoming socio-cultural events that take place at his library. 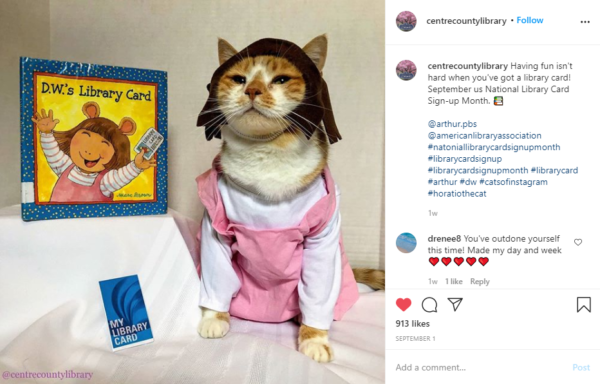 In 2009, the Litchfield Public Library in Illinois adopted Stacks from a local shelter, to help combat the library’s rodent invasion. After eating all the mice in the library, she has now resigned herself to a life of snuggles. She is also an expert in video surveillance, meticulously monitoring the activity within her library. Stacks is a key player for Lichfield library’s fundraising strategy, allowing them to sell t-shirts and coffee mugs with Stacks’ picture on them, which benefits both the library and Benld’s Adopt-a-Pet shelter. 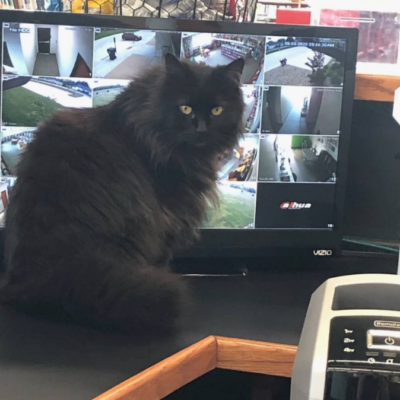 The Alabama’s Pinson Public Library is home for another charming cat called Socks. Today he has a lavish life, filled with love, cuddles and long naps. However, he had a very tough start in life. When Socks was a just a kitten, he was abandoned on the side of the road and shortly after, rescued by the city’s councilor. Socks was eventually adopted by his local library. This lucky cat is also a charitable fellow. Every year, on the 10th of August, a birthday party is held for him, put on by the library staff. All the gifts received—usually cat toys, litter, and food—are donated to local animal charity organizations. This year Socks won the title of Birmingham’s Coolest Cat and even received a trophy. He also became the ambassador for Animal League and won a prize package from Hollywood Feed, which included a soft bed and healthy treats. Being so famous comes in handy for promoting his library. You can follow him on Facebook “Socks the Library Cat,” and also on Instagram at #socksthelibrarycat. 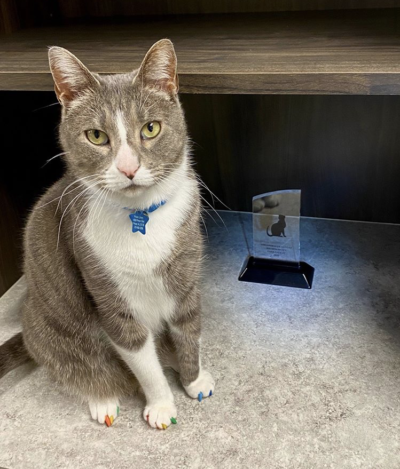 Lucy is the star of the North Central College’s Oesterle Library. She is a recognizable online figure, frequently appearing in students’ Snapchat stories. Lucy also has her own bookish Instagram profile, with around 4.8K followers, and she was recently featured in a BuzzFeed article, ranking at number 7 out of the 13 best library Instagram accounts. “Unlike most library cats, Lucy isn’t a full-time resident at Oesterle. She often wanders between her neighborhood home and the school’s library. She mostly appears during the fall and spring terms, and cannot be found during the cold Chicago winter.” says Grace Klooster in her article for NCC Linked. 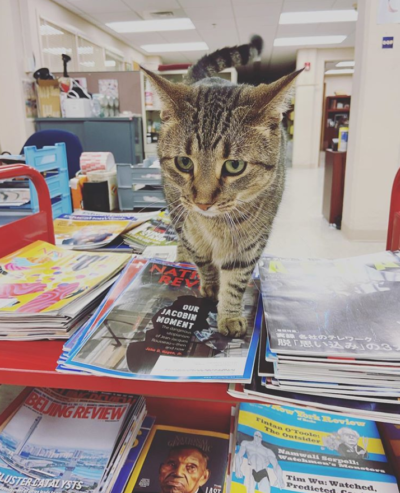 Benefits of having a library cat

Besides being the best mousers, what are the other benefits of having a resident library cat­?

1. Cats can reduce stress, thus, boosting the morale of both staff and visitors

2. Creating a fun and relaxed environment which could help kids break the ice and discover a love of reading

3. Cats won’t get in the way: these fluffy felines are self-sufficient and independent. Despite being very affectionate, cats are by no means constant attention seekers, as they sleep on average 15 hours per day.

4. Library cats may choose to sleep nearby or on a reader’s lap. This is likely to produce purring, a sound of contentment, which may, or may not have healing properties.

5. Felines have been known to make wonderful greeters, sitting by the front door, welcoming all humans as they enter the library each morning.

6. Cats are particularly adept at inspecting all boxes that enter the library, for both security violations and comfort level.

7. Adopting a cat from a local shelter can sometimes turn into a surprising partnership. With this action, the library is also setting an example for the community to follow.

8. Cats make great mascots for the library; they can make a considerable contribution towards increasing the library’s national, or even worldwide, publicity.

Most of us can agree that cats are adorable and completely irresistible creatures, very fitting as library residents. Nonetheless, we cannot disregard the comfort and wellbeing of patrons that suffer from pet allergies. We, therefore, want to provide relevant measures for protection and workarounds, that will ensure the library remains a safe environment for everyone.

First, it is necessary to keep the library cat out of the area that the sensitive patron is wishing to use, preferably by confining the furry friend to a separate room. If possible, run a HEPA air filter to clear away the allergens from the air. Because the allergic reaction is caused by proteins in feline urine, saliva, dander, and dead skin cells, it is recommended to groom the cat daily. This will certainly be a bonding and joyful experience for both, the pet, and the library staff. Another tip is to steam-clean the carpets, vacuum all the sofas, and wipe the dust from the bookshelves, tables, and other library furniture.

Finally, it is advised by many pediatric allergists that people with pet allergies should take antihistamines ahead of time. Librarians can encourage such protection measures, by sharing this knowledge on social media or placing informative posters inside the library. For patrons who prefer a no-contact book handling, either due to their health condition or even those that are COVID responsible, the library can choose to offer curbside pick-up services.

“Happiness is a comfy chair, a book in your hand, and a cat in your lap.”

Cats are regal creatures and have been winning the hearts of humans since ancient times. We have worshiped, pampered, and adored them despite the occasional misbehaviors. Librarians and cats are certainly a match made in heaven, as both are highly intellectual with calm and comforting personalities. If you are considering a whiskered friend for your library, make sure to keep the environment safe for everyone. But most importantly get ready for the library to thrive due to the joy they can bring for librarians and patrons alike.

Read more about  The Tradition of Library Cats, and 10 Cats Who Live at the Library.

Daniela is a content writer for the Princh Library Blog. Princh, which is a printing solution designed specifically for and with public libraries, makes a consistent effort to provide advocacy for libraries and library professionals. The Princh Blog discusses library specific topics that inform their readers of library trends, insights, technologies and more.