This week’s Princh Library Blog post was written by recurring guest writer Edgardo Civallero. The post explores the methods through which different organisations are keeping the language of the indigenous people of Central Chaco alive.

The phyto-geographic and cultural region known as Chaco or Gran Chaco (from the Quechua chaku, “hunting land”) is a flat surface, covered by dry forest and furrowed with wide rivers, encompassing northeastern Argentina, the southern Bolivian lowlands, practically all of Paraguay, and part of the Brazilian states of Mato Grosso and Mato Grosso do Sul.

The central area of ​​ Chaco, located within the Paraguayan border, was —and continues to be— the traditional territory of indigenous peoples belonging to the Maskoy linguistic family.

The family includes the Enlhet (known, in ancient literature, as “northern Lengua” and “Guaná”), Enxet (“southern Lengua”), Enenlhet (“Toba-maskoy” and “Angaité”) and Nenlhet (“Sanapaná”). These societies comprise around 25,000 people, who live in small rural or peri-urban communities distributed among the departments of Alto Paraguay, Boquerón, Concepción and Presidente Hayes: basically, the northwestern half of the country.

Although the contact of these populations with the European conquerors from their arrival in the area in the 16th century was scarce, they did not have the same luck during the republican period. In fact, the Chaco War between Bolivia and Paraguay (1932-1935) terribly affected the Maskoy-speaking groups, which were displaced from their traditional spaces and suffered strong changes in their ways of life.

The sustained arrival of Mennonite refugees (from 1927 but, above all, from 1945 onwards) worsened their situation: the extensive farming and livestock practices of these settlers required the prior clearing of native forests, as well as the massive use of valuable natural resources. And, at the same time, they uprooted and impoverished indigenous societies even more. In fact, they still do. It is estimated that in the last 90 years, native communities lost 98% of their territory.

In central Chaco, the group Nengvaanemkeskama Nempayvaam Enlhet (“Make our Enlhet language grow”) was born — a small collective of cultural action in which members of the Enlhet and Enenlhet peoples participate. The group’s work focuses on the recovery of the language, the identity, and the cultural / territorial memory of the Enlhet through mechanisms and processes traditional to those aboriginal societies.

The triggers for their work were numerous and complex: on one hand, the loss of access to traditional territory and, with it, to certain cultural expressions, which, in turn, are encoded by a language in absolute decline, and sustained by memories and oral traditions that only a few conserve. On the other, the damage that those losses cause among all segments of the indigenous population, but especially among the youngest, almost completely devoid of their original identity.

These problems are common to a good part of the native peoples of the Americas. However, in this specific case, a series of original actions have been developed that seek to reverse the trend and build future paths. 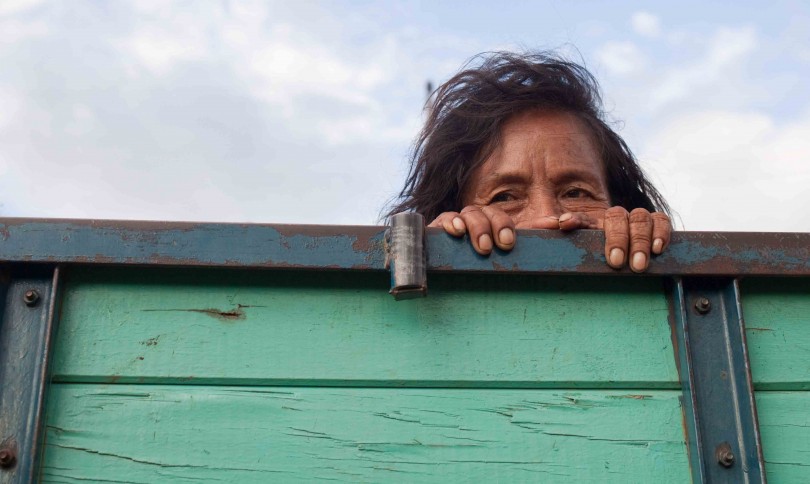 Woman of the Enlhet community of Filadelfia (Boquerón department, Paraguay)

Future Paths to Past Voices

Nengvaanemkeskama Nempayvaam Enlhet embarked on projects such as Memory of the Ancestral Enlhet Territory (2012), which identified and pointed out traditional places in the hands of the elders, supported by the initiative Marcar Territorio, Expresar Cultura of the then Directorate of Indigenous Affairs of the National Secretary of Culture of Paraguay.

However, one of the most interesting initiatives of this group is the one that lives up to its name: the compilation of traditional stories in the six original languages ​​of the Maskoy-speaking societies. With this activity, the narratives of the last generation that recall both traditional stories and the appropriate words to tell them are recovered in writing, but especially on video (project Voz Original). Words that convey precise meanings, values, principles, and ways of seeing the world and interacting with nature and with people.

Going one step further, and recognizing that a significant part of the problem of identity loss lies in the disappearance of the spaces in which languages ​​can be used and oral knowledge is recreated and transmitted, between 2001 and 2012 Nengvaanemkeskama Nempayvaam Enlhet converted its oral recordings in 15-minute sound fragments and broadcasted them weekly through a local radio station in the town of Teniente Irala Fernández. There were more than 300 radio “programs” that allowed the voices of the Enlhet to have their place and their moment in a mass media.

Some of the group’s audiovisual productions are available, for free access, on their website. It is a true audiovisual library, which collects memories and words saved from oblivion. For their part, the stories recovered in writing are part of half a dozen books written in native languages, which can also be downloaded from the website.

Nengvaanemkeskama Nempayvaam Enlhet works with other groups in Chaco: from the Liga Nativa por la Autonomía, Justicia y Ética (Native League for Autonomy, Justice and Ethics) of the Aché people to the small groups that participate in the now famous Feria de las Lenguas (Language Fair), held annually in Asunción. All of them are proposals that seek to give vigor to the muted —but not disappeared— original voices of the central Chaco.