Aars Library, a small local library in Vesthimmerland Municipality in Denmark, worked intensively with the Model Programme’s principles and tools in 2015 to develop an interior design concept on a small budget and based on flexibility and anti-institutionalisation. With just 644 m2 (6,932ft2) spread across one large room, a limited budget and a principle about keeping the library open throughout the entire process, there was plenty of work to be done when refurbishment commenced.

The project was funded by the Agency for Culture and Palaces’ development pool for public libraries and educational learning centres. Further information about the project is available in the project evaluation or on request at the library. The project leader was Mette Nissen and you can access a small presentation she made for the library project here. Since the transformation project has taken place the number of visitors at Aars Library has increased to date approx. +10% and they have seen new users visiting the library. They have also noticed that the library is being used in more ways than before. Both the staff and users are happy with the transformation.

Changes on a small budget

The ‘Hack your library’ project was launched based on a wish to create a library space for people and with space for the many new functions that the library has worked with for several years – inspired by the four-space model. The project also aimed to become an inspiration to other libraries by showing that the Model Programme’s ideas are not dependent on big grants or the construction of new libraries – they can be implemented on a limited budget in existing buildings. 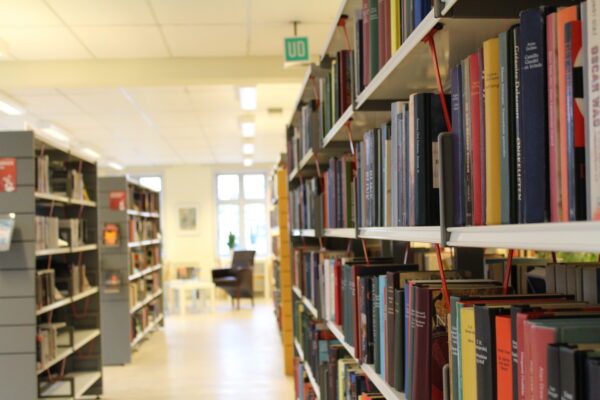 In collaboration with a local production school, Vesthimmerland Municipality’s libraries have demonstrated how the Model Programme’s tools can be used to transform a small local library on a small budget. The result is a new expression, satisfied users and a flexible library with many new possibilities.

The project focuses particularly on establishing local anchoring through collaboration with the local Kongshøjgaard Production School, with Vesthimmerland Municipality’s Centre for Competence and Clarification, and the inclusion of the library’s users.

Kongshøjgaard Production School helps students get closer to job opportunities and education, and the main idea with the collaboration was to create a teaching case for the metal and textile programmes, giving the students the chance to work with a type of task that they might encounter after graduation.

Similarly, collaboration was established with the Danish Centre for Competence and Clarification about the affiliation of unemployed young people. In addition to Kongshøjgaard Production School, designer Anne Halskov was involved in the project from the very beginning. Anne Halskov was in charge of the visual expression and design, while Kongshøjgaard Production School handled the practical execution and construction.

In addition to these collaborative efforts, the local anchoring of the project was created through a targeted dialogue with the users who were continually involved via interviews, generation of new ideas, inputs for improvements and voting. 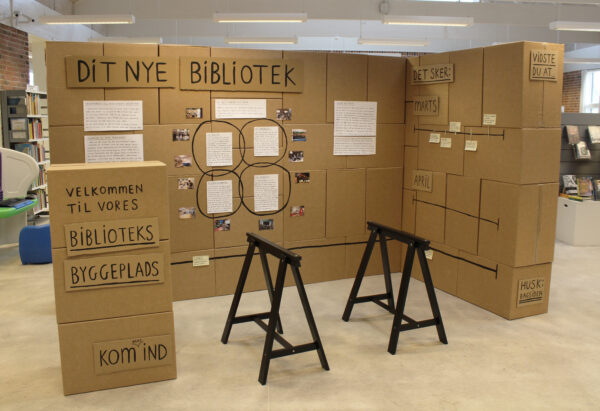 At the beginning of the project period, a library construction site was set up, where news was continually published to create openness and involve the users in the entire refurbishment process.

The first step in the transformation of the library space was to get a clear idea of the users’ needs as a basis for selecting improvement potentials. The user surveys showed a number of conflict points, which primarily came down to insufficient space for activities and the user groups’ inappropriate positioning in relation to each other.

The surveys also showed that the users’ movement patterns were concentrated in a triangular route, and that the library had several unutilised areas. It was evident that it was necessary to rethink the space in order to optimise the use of the relatively few square metres.

Taking the Model Programme’s zones as the starting point, the library was successfully divided according to functions, thus minimising the conflict points. At the same time, it was necessary to prioritise the use of the available space. As a consequence, all materials were arranged in a compact setup in order to release square metres, accommodating the wish for new activities and more seating and study places. The space is now designed to favour the users’ needs over the collection. 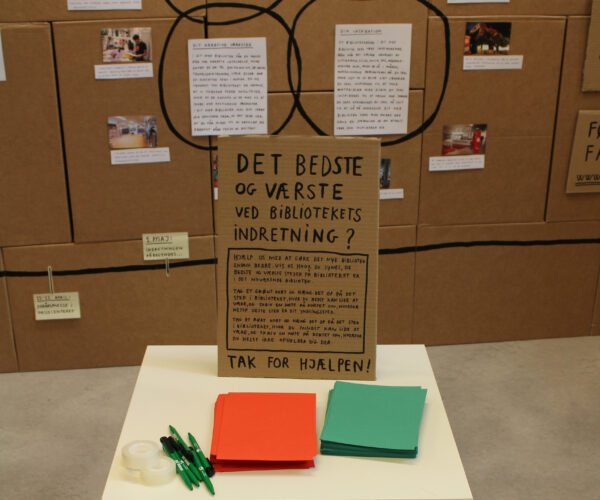 The users were asked to write down their thoughts about the library’s old interior design. Each user was asked to write a red note and stick it in the place in the library that he/she liked the least. Green notes were to be attached to the user’s favourite place. Finally, the notes were gathered and provided inspiration for the new design. Here is an example of a note about the user’s experience of the newspaper reading area. The user enjoys sitting by the day’s paper, but is often bothered by either loud children by the arcade machines or loud grownups skyping on the computers nearby. The newspaper reading area should therefore be placed somewhere a bit quieter.

The refurbishment has had an impact on the number of visitors from day one. Declining visitor numbers have been replaced by a five per cent increase. Furthermore, users spend more time at the library, and new user groups have been added.

The users’ evaluation of the new interior design singles out the aesthetic expression in particular. The users feel that the library seems larger, that it has become brighter, that the style is homely, and that it is now more clearly laid out. Three interior elements are given special mention:

1) the space for children and families with children has improved,

2) the young people are pleased to have their own space, and

3) the division of the library into zones has created a very clear layout.

The new interior design made room for a greater variety of activities and target groups, which is in line with the Model Programme and the four-space model. Above all, this is evident in the flexible utilisation of the Square, where the activity level has gone up and space has been created for event types that could not be held at the library before. 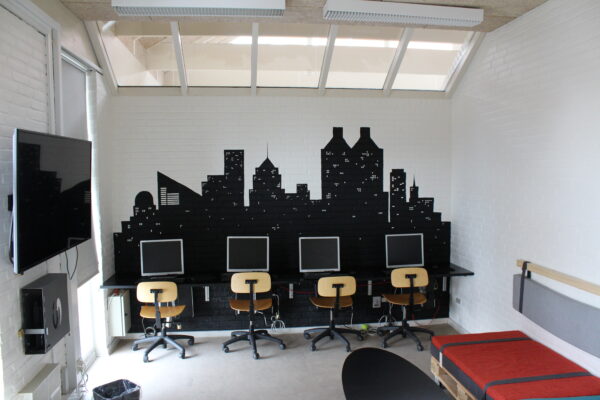 The gamer space is the young people’s special area where they sit side-by-side playing computer games and PlayStation in the shadow of the skyline on the end wall. The sense of community and fun has been given pride of place here. 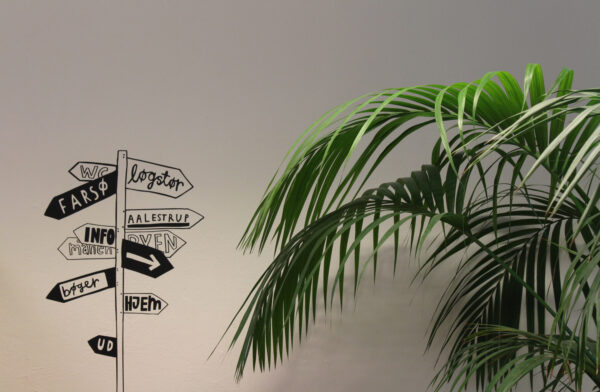 The library’s own designer has drawn many illustrations, and the recognisable style is repeated everywhere, its personality and humour adding signature value to the expression. The illustrations were made on the workshop’s vinyl cutter. The illustrations are flexible and can be removed from the walls and replaced with other drawings or writing.

The new interior design has given the library more personality, identity and humour, and it has become a place where anything can happen. The project has created such positive results at Aars Library that the concept will now be rolled out to the municipality’s three other libraries. The original text of this case is written in Danish by Mette Nissen. The original text was by Agency for Culture and Palaces. If you would like further information on the specifics of the Aars library transformation you can email Mette Nissen here.

Journeying With The Nigerian Public Libraries

Libraries exist to serve their communities. Said communities should include those who are traditionally looked at and treated as outsiders; people who [...]